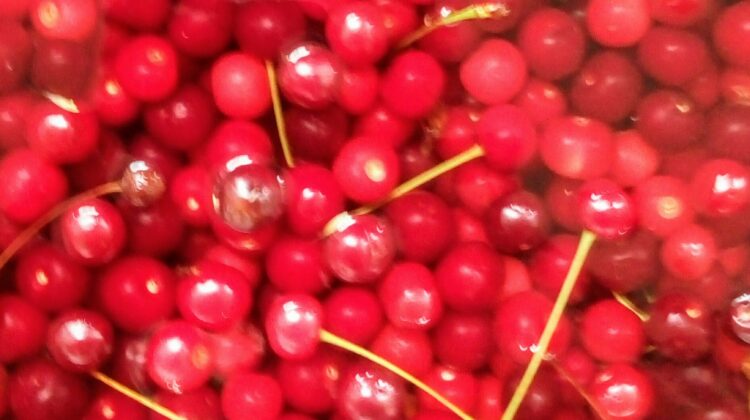 Cherries are one of my favourite fruits. Luckily for me, there is a stand of wild cherries not too far from where I live. When the weather is right, they provide an abundant crop of small sour-sweet cherries. Two years ago, when it was spectacularly dry, the promising yield all dropped to the ground long before the fruit reached maturity. Last year, I collected a reasonable amount. This year, while on my periodic wanderings through the space for exercise, I noticed the familiar reddening in the middle distance. The recent rains came in time to save them. When I judged they would be ripe, I went out with my harvesting bag to seek the crimson treasure.

The fruit has been early to ripen this year with raspberries, redcurrants and orchard fruits all being ready to pick much sooner than usual. Last year when I was at the spot there was a lush growth of foliage between the trees and the path, whereas this year, it is not even half as tall. When I arrived, I could tell that others had been at the fruit before me, because of the telltale empty stalks, but there was still plenty on the branches. A few cherries scattered on the ground gave a clue why they hadn’t been stripped from the boughs. They are too sour for some people to enjoy. Even after I had picked my fill, there was a generous supply for the birds. Once I had gathered enough, I walked home with my burden to contemplate the next stage in the process of turning them into something I can enjoy later in the year. This thought was with mixed feelings since I knew it would be a time-consuming activity. I left them in the sink in water while I had a cup of tea to prepare myself. I knew not to leave them in water too long though; otherwise, they would swell and split.

The least enjoyable part of preparing cherries for longer-term storage is removing the stones. This process involves squeezing the stones out one by one over the preserving pan, catching the stone in your hand and discarding it in a separate bowl. Periodically the residual juice in the bowl should be emptied into the pan. It took me two and a half hours of standing and squeezing to process the lot. Let no-one tell you foraged cherries are ‘free food’.

On the other hand, the very first time I cooked them up, I spent an unconscionable amount of time fishing the stones out of the pan as they floated to the top. Hence why I prefer to get the worst job completed sooner rather than later. Once that is finally out of the way-rejecting any of the darkest cherries that have gone over so far that they have become dry brown pap within-the business of cooking down and adding some sugar while stirring is neither here nor there. As cherries are low in pectin the mixture won’t set on its own, so the sugar is to take off some of the sharpness and help preserve it, although I keep it in the fridge as well. Anyway, the annual ordeal is out of the way for now, and I have several jars of processed cherries to hoard and enjoy when I will.