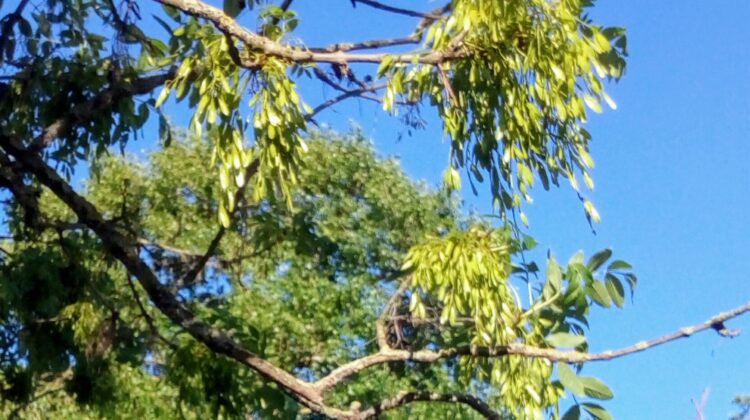 I spotted these ash keys on the way to work yesterday. They are the perfect size for pickling. If they are left to grow much larger they will probably be a good source of fibre but unpleasantly woody.

Pickled ash keys is an old recipe but I only found out about it a couple of years ago. I was planning a tree trail and needed one more tree to include. I typed in ‘ash edible’ and there it was. Initially, I thought it was just something someone had done for the sake of it and put the procedure on the internet. Further research revealed it to be a bona fide recipe. I made it myself but last time I gathered the keys a bit too late. Although the taste was okay, some were too large and chewy.

Today I took a couple of handfuls of young ash keys, each one only about 1″ long, so they should be fine. I’ve re-read the recipe and recall it involves boiling up the keys several times to remove the tannins. I’ve found with pickles it is important to use a decent vinegar and enough muscovado sugar to avoid the condiment tasting too sharp. I won’t be making an endless supply since it is not the sort of thing I would actively crave, but it will be nice to have on hand for dishing up with a selection of fine cheeses or charcuterie directly it is permitted to have guests. The seeds can be eaten in the autumn. It says so online, so it must be true!