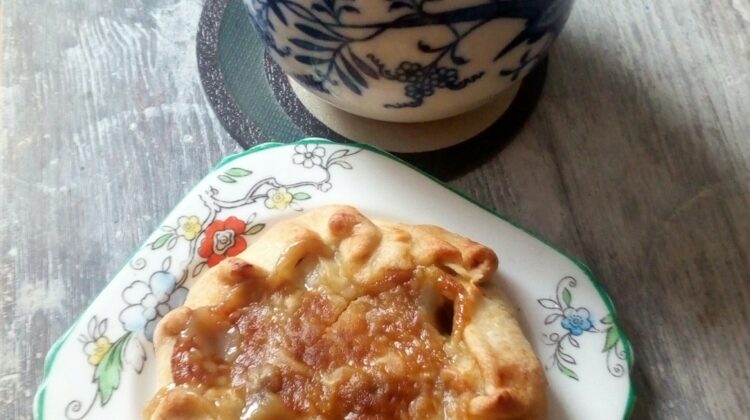 Potatoes can be used for sweet dishes, so long as you are not too fussy. It helps if you were raised on nursery puddings and have a nostalgic yearning for easily digestible gloop. It is an easy way to feel full if the preceding main course was a bit lacking, say a thin soup or something on toast.

Begin by peeling some potatoes. Retain the peelings for frying as a snack later, just be careful not to over fry them in an attempt for maximum crispiness, it turns them bitter. A dash of balsamic vinegar and salt is all that’s needed to complete the taste experience. However, I digress. Chop the peeled potatoes – the smaller the pieces, the quicker they will cook, rinse the starch off them several times and boil until softened in enough water to cover them. Don’t discard the water, but mash the potatoes into it, then use a hand blender to create a smooth paste. This will form the basis of your pudding. At this point you can bail out and use it to make soup, otherwise, read on.

You know this is potato, so the key thing is to trick yourself by overpowering the flavour with a stronger one. I’ve used very ripe banana, mashed and blended into the mixture. Finely chopped unwaxed lemon peel also worked. I would imagine marmalade would be effective, and strawberry jam would give a suitably pink colour. Muscovado sugar and mixed spice with chopped dates and sultanas certainly the trick. Unlike rice pudding, I don’t think this would appeal served cold, but it is a cheap and easy way of having something to hand to fill a space.

Pictured is a small tartlet topped with a little sweet mash over a mixture of pickled figs and vine fruits, with a layer of plum jam to protect the pastry (the thin pastry made with olive oil), a sprinkling of sugar on top served with dandelion coffee. It made a nice treat after a bout of walking for exercise.