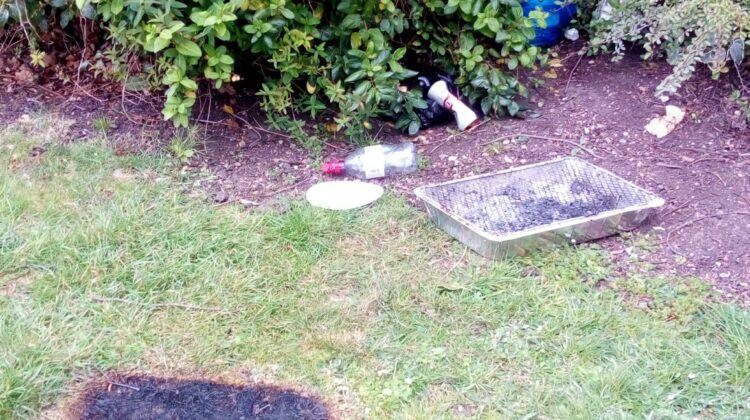 A while back, I was on the very last lap of my weekend route. I do 8 laps. 8 is highly esteemed in Chinese culture, and considered very lucky. If a bit of cultural appropriation helps to get the job done, who’s complaining? In any case, I’ve usually had enough by then. I keep count by thinking of a song for each numbered lap. For number 8, the song is who ate all the pies, and if sung to the end contains a further encouragement to control one’s calorie intake.

Just as I was trotting up the final path, thinking how pleasant it was that I hadn’t seen anyone else despite setting out later than usual, a large dog bounded across the path ahead, crouched down and left a great pile, before scampering off back through the trees. At that, I just had to get to the top so I could look across the space, the better to silently judge and criticise the owner responsible. If you can’t see your target, how can you shoot death rays of opprobrium from your eyes at them? I did manage to get a proper view, aimed, and fired.

A couple of days later, the offending article had been removed from the path, whether by a public-spirited soul, or a council worker I don’t know. The barbecue and accouterments that appeared at Easter were also removed not long after appearing but not by the selfish people who left them there in plain view. I mean, at least hide the evidence of meeting in groups, even if you can’t summon up the energy to take away the same stuff you managed to carry to the place. As the year progresses, I will be able to observe the grass gradually infilling the burnt patch.

Then there are the other people who leave only footsteps, like the woman I saw photographing a tree stump in the same space because it had piqued her interest. See attached. You can’t quite see the little ‘pond’ inside, but even with the light cutting across I couldn’t quite see what she found so intriguing, or rather how to capture all the elements in one photograph. She wasn’t harming anyone though.

The mouse was there one morning, gone the next. Why hadn’t whatever killed it, eaten it at the same time? It doesn’t matter in the great scheme of things, it’s just another sight seen on the daily round, never to be seen again.

The main benefit, aside from the physical activity, is the time to think and plan, and process everything that has happened in the last few weeks out in the fresh air instead of being cooped up indoors all day. There is also an ever-changing view, like a symphony composed of the same separate movements, but with the different sights modifying the performance ever so slightly over time. It’s just a shame about the occasional bum note.