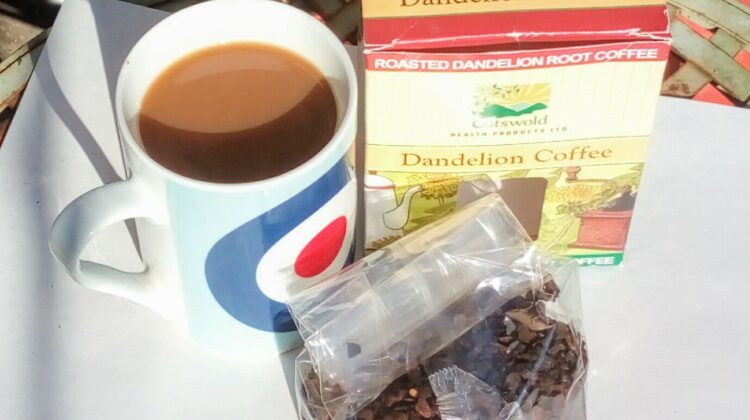 I’ve been drinking more tea than usual, but during the Great Turning Out of the Kitchen Cupboards I rediscovered this packet of dandelion coffee dated September 2019. Twenty years ago or more I was given a jar of powdered dandelion coffee and quite enjoyed it, but this is different.

The first thing to notice is the tiny size of the pack of coffee compared to the actual packaging. The weight is exactly as described, but the bag of coffee inside comes no higher than the little window it peeps through. I thought Esther Rantzen had put the kibosh on that sort of misleading packaging back in the ’70s, but apparently not. Still…That’s Life!

It is supposed to be ground in a particular type of coffee mill. Not having any kind of coffee mill, I set to with the pestle and mortar while the kettle boiled. Then mindful that boiling water can scald regular coffee and make it taste bitter, I added a dash of milk to the mug before pouring in water. Finally, I strained it all through the tea strainer into a second cup to get rid of the bits floating around.

This coffee has a good, rich flavour, much closer to real coffee than the powdered stuff had and is a decent colour as well. The grounds caught in the tea strainer went into the compost bin, but the second time I used it, I left the whole lot in the mug and spooned out the grounds afterwards which had softened by then and ate the lot. They tasted fine and could go well in a cake to give it a stronger flavour.