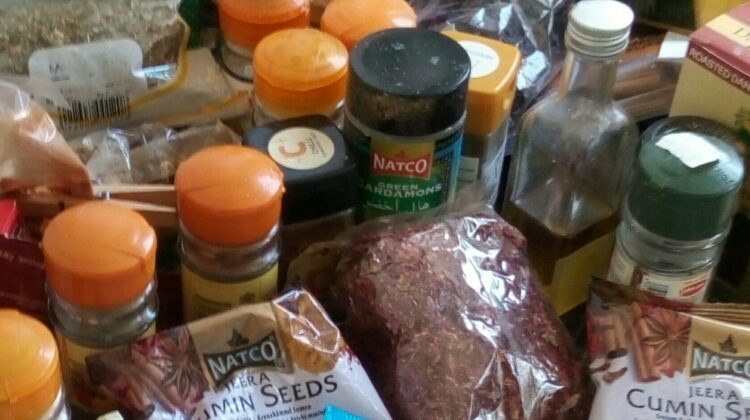 There has been a lot of turning out of cupboards over the past few weeks. I decided to investigate my basket of herbs and spices to see what was actually in there. I don’t know what possessed me to buy two packets of cumin seed and two of cumin powder, all but one unopened. I know I like Jeera Chicken, but I’ve never cooked it at home. As one friend commented ruefully when assessing her cupboards, “makes you realise there could be a better stock rotation going on”.
There were a few other reminders of things bought in a spirit of adventure, for instance, the chamomile which I bought to make lamb with bitter herbs. If only I’d kept the recipe when I saw it in a magazine all those years ago. There are two lots of cinnamon sticks, obviously not an everyday ingredient, since they are both unopened. To summarise, a lot of stuff with dates long past. The good news is, herbs and spices don’t go off as such, they just gradually lose their flavour. Perhaps now is the time to actually open these packets and jars and treat my taste buds.
Luckily, the internet can provide inspiration. I have tried, as an experiment, keying in 3 random ingredients followed by the word ‘recipe’ and so far there has always been someone, somewhere in the world who has dreamed up a dish containing them. Whether you feel inclined to make and eat it is another matter.