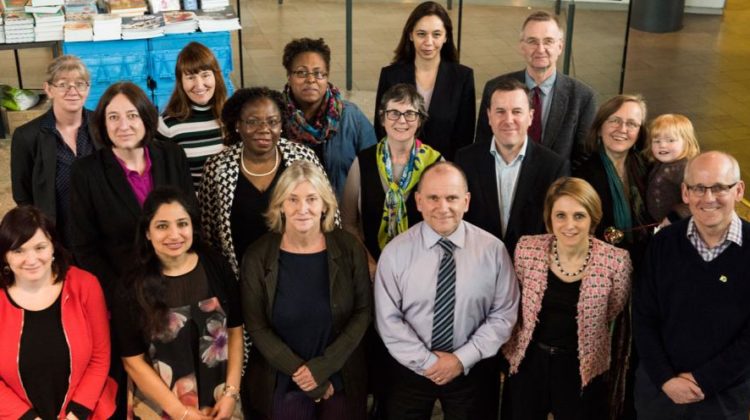 Finally, we can announce that Claire Pritchard CEO of GCDA now sits on the London Food Board.  The following press release was sent out on the 3rd May.

Experts to help deliver Sadiq’s food vision for the capital

The Mayor of London has today announced the group of experts which will help him cut food waste and tackle food poverty across the capital.

It will also work closely with partner organisations – such as retailers, producers and suppliers – to make significant improvements to London’s food system.

The Mayor of London, Sadiq Khan, said: “London is one of the greatest cities in the world for food. We have vibrant restaurant and street food scenes which rival anywhere in the world. This sector is also an important part of our city’s economy and a source of thousands of jobs, not to mention a major draw for the millions of visitors who come here from around the world.

“But the reality is too often the food system does not work well for all Londoners. Food is a key part of my social fairness agenda – it has a direct impact on people’s life chances in terms of health, academic attainment and economic productivity in adulthood.

“It can’t be right that in a city as prosperous as London that, on the one hand, so many people have to use food banks while, on the other, so much perfectly edible food is simply thrown away.

“My new London Food Board includes some of the best and brightest from across this sector. I’m looking forward to seeing how the members’ wealth of knowledge and experience will help us make London a world-leader in effective food policy.”

Rosie Boycott, chair of the London Food Board, said: “The new London Food Board puts the Mayor and the capital in a great position to tackle some of the complex problems which exist in this area, not least tackling food poverty and food waste. We will be developing a new Mayoral London Food Strategy integrating food across all the areas it impacts, and I’m confident the Board’s members will bring their expertise to bear on this and many other issues.”

London Food Board member Kemi Atijosan said: “London’s diverse communities create such exciting and unparalleled opportunities to draw inspiration from all around the world in order to solve the challenges facing our city. We look forward to working together to think differently, solve collaboratively, create innovatively, think sustainably, respond effectively, champion diversity and to celebrate all that is great and unique about London’s food both now and in the future. I’m honoured to be given the opportunity to serve this amazing city in this way.”

Fellow board member Claire Pritchard said: “I am honoured to be a member of the Mayor’s London Food Board alongside such talented and experienced colleagues. Food is a crucial part of life in the capital and I look forward to helping deliver the Mayor’s priorities of social fairness and economic productivity food in the capital.”

Jo Ralling said: “I am really excited about the unique opportunity we have to write a strong and robust Food Strategy to ensure London is a world leader with a vibrant food environment. We will work hard to ensure every Londoner has access to good, affordable food, and work in schools and communities to ensure our children grow up living healthier and happier lives.”

Rosie Boycott has had a long and distinguished career as a journalist, publisher and author, including having been the editor of several national newspapers in the UK. In 2008 she was appointed as Chair of the London Food to advise the then-Mayor of London on sustainable food policy implementation in the capital. In October 2016, the Mayor of London Sadiq Khan asked Rosie to lead the development of a new London Food Strategy to help the food system to work better to meet the needs of everyone who lives and works in London. As Chair of the London Food Board Rosie writes regularly and speaks all over the world about the role of cities, and the importance of food in improving health, tackling childhood obesity and helping to reduce carbon emissions contributing to climate change.

Kemi Atijosan is Founder and Managing Director of Eagle Solutions Services, a food consultancy company that specialises in supporting education establishments to secure all round improvement by putting food at the centre of learning. Kemi has a background of successfully leading and managing diverse food services in the public, private and voluntary sectors for more than 30 years, where she has constantly developed and created innovative solutions to meet service challenges.

Tim Baker is head teacher of Charlton Manor Primary School in Greenwich. Charlton Manor is regarded internationally as exemplary for its whole school approach to food. Tim is a member of the School Food Plan Alliance, the National Child Measurement Programme and RHS Education Committee. He is also Co-founder and Chair of Roots4Life, a charity focused on food education.

Minette Betters is Deputy President of the National Farmers Union. She has a background in farming and has been an NFU member from grassroots through to County Chairman; she served as Wiltshire’s Council delegate and also as Regional Board Chairman for the South West. Minette has also been a member of NFU Governance Board and the agricultural representative on the South West Environment Agency Flood and Coastal Committee.

Lindsay Boswell is the CEO of Fareshare, the UK’s leading food waste charity which supports more than 5,000 charity and community groups across the UK and provides enough food for more than half a million meals a week. Lindsay is a previous London Food Board member and has more than 25 years’ senior experience in charities.

Dr Helen Crawley is a registered nutritionist and dietitian with over 30 years’ experience in public health nutrition working in national and international policy, academia, research and with the third sector. Helen is currently Director of the small independent public health nutrition charity First Steps Nutrition Trust. She is also coordinator of The Healthy Start Alliance and honorary research fellow at the Centre for Food Policy, City University London.

Helen Evans has held the position of Director of Business Development and Support at New Covent Garden Market – the UK’s largest horticultural wholesale market – for 20 years. New Covent Garden Market has some 200 SME companies employing over 2,500 people. Helen is a member of the Association of London Markets, Vauxhall BIOD Steering Group and Nine Elms Partnership. She is a previous member of London Food Board.

Sarah Williams is Programme Director at Sustain. She oversees a broad portfolio of food projects and programmes and is the Sustain lead for London. Sarah has extensive experience and knowledge of urban food growing – including leading Capital Growth – one of the World’s largest urban food growing networks.

Professor Corinna Hawkes is Director and Professor of Food Policy at City University London, having taken over from Tim Lang in 2016. She has spent her entire career in the food, health and nutrition sector. Corinna has published well over 100 articles and given over 100 presentations. She is a Trustee of Sustain: the Alliance for Better Food and Farming. She previously held positions as Co-Chair of the Global Future Council on Food of the World Economic Forum at the international-level and the Scientific Advisory Council of Healthy Food America at the national level.

Professor Tim Lang is Professor of Food Policy at City University London. Tim has researched widely in food policy, specialising in public and environmental health, trade and inequality. He is author and co-author of more than 100 articles, 11 books, 48 chapters, 68 reports and briefings. Tim set up the Centre for Food Policy in 1994, and was Director from 1994 until 2016. He is a previous member of London Food Board.

Ufi Ibrahim is the Chief Executive of the British Hospitality Association, the leading authority on Hospitality and Tourism representing 46,000 businesses across the UK. Since joining the BHA, she has spearheaded the establishment of the Tourism Industry Council – a joint government and industry working coalition chaired by the UK Minister for Tourism where Ufi serves as a member, the Agenda 300,000 Jobs by 2020 and The Big Hospitality Conversation (resulting in 67,000 new career starts for under 25s), and The Hospitality & Tourism Summit.

Angela Malik has more than ten years’ experience of the UK food and hospitality industries. She successfully built a multi-site Asian cookery school and deli business in London, ran food stalls at 7 London markets and has advised multi-national companies on their food strategy. Angela currently teaches an Indian Masterclass at Leith’s School of Food and Wine. She is a regular panellist on BBC Radio 4’s The Kitchen Cabinet, Channel 4, ITV and will be appearing as a competitor on the BBC’s Great British Menu in 2017. Angela is a recognised expert of Asian food.

Andrew Opie has held the position as Director of Food and Sustainability Policy at the British Retail Consortium for 12 years. He has detailed knowledge of the food supply chain and is responsible for managing relationships with large food retailers across the UK. He has made significant contributions to policy and legislation in the UK and Europe. Andrew previously worked at the National Farmers Union as Head of Policy Services.

Claire Pritchard is CEO of Greenwich Cooperative Development Agency, a social enterprise development agency focusing on supporting sustainable communities. Since 2010 she has led GCDA’s transformation from a grant funded organisation to a self -funded trading social enterprise now turning over £1,000,000 a year. Claire has more than 27 years’ experience in the food sector, is a previous London Food Board member and a Trustee of Borough Market. Claire also chairs the Boroughs Food Group – a sub-group of the London Food Board.

Jo Ralling has held a senior management position in the Jamie Oliver Group for the last 11 years, with responsibility for coordinating strategic campaigns across the group’s four pillars – Foundation, Restaurants, Licensing and Media. She currently works for the Jamie Oliver Food Foundation as Campaign Director SUGAR SMART and has played a key role in the UK and global advocacy campaign to raise awareness of the dangers of sugar to long term health. Jo is a member of the Children’s Health Board and London Obesity Leadership Group.

Anna Taylor is Executive Director of the Food Foundation, an organisation working to influence UK food policy. She is a qualified nutritionist, with more than 20 years’ experience working on food policy in relation to nutrition, public health, agriculture and poverty alleviation. Before joining the Food Foundation Anna worked for DFID in a range of roles including Head of Hunger Reduction and Senior Nutrition Adviser and has significant experience in the charity sector.

Laura Wellesley is a Research Associate for Food Security and Climate Change at Chatham House. For the past two years, she has been heading up Chatham House’s work on sustainable and healthy diets, with a specific focus on meat consumption. Laura was lead author on Chatham House’s flagship 2015 report, Changing Climate, Changing Diets: Pathways to Lower Meat Consumption. She has since spearheaded Chatham House’s outreach with international media, policy makers in key countries and civil society in the UK, Europe, China and the United States.

Dee Woods has worked in various roles as a community practitioner for the past 25 years. She has a background in community food education, health promotion, organic food growing, cultural foodways, food history and research, community media, project development and citizen engagement. Dee is currently Co-Founder and Coordinator of Granville Community Kitchen and was named 2016 BBC Food and Farming Awards Cook of the Year